Why do we feel guilty about eating food?

Food is meant to nourish our bodies, yet we find ourselves experiencing feelings of guilt after eating certain foods. It used to just be things like chocolate that caused these feelings, but nowadays people feel guilty about eating bread, drinking a glass of milk, and even eating certain vegetables.

Eating is a pleasurable and happy experience, but when we feel guilty it makes the experience unpleasant. Frequently unpleasant eating experiences will eventually erode self confidence and trust in our body, as well as our relationship with food.

So, what causes feelings of guilt around food, and how can we stop it. Guilt is a psychological effect of deprivation. If anything in life is restricted, it sets up that thing to be extra special. For example, if you put a child on the floor with a variety of toys and tell him that he can play with any of the toys except the empty box, he will probably only want to play with the empty box. Deprivation of an item can heighten the desire for the item.

If we deprive ourselves of foods that we enjoy, we will probably end up craving those foods more. The deprivation backlash is; rebound eating. Feelings of being addicted to chocolate often lead to not allowing any chocolate at all. This will more than likely result in a backlash where the whole box or slab of chocolate gets eaten instead of just one or two pieces. The “what the hell” effect is commonly experienced here; where a dieting rule is broken, and we can no longer restrain our eating.  This is usually accompanied by feelings of guilt, swearing not to eat chocolate again, and compensating by under-eating.

The longer foods are prohibited for, the more seductive they become. Eating these foods is accompanied by a sense of guilt. As the guilt increases, so does the quantity of food intake. The more deprived we become from specific foods, the greater the deprivation backlash.

Deprivation and guilt work like a seesaw; when one goes up, the other must come down.

As we restrict foods that we enjoy, deprivation gets higher and higher. Meanwhile, feelings of guilt go down because no ‘bad’ foods have been eaten. Eventually, deprivation gets to its highest level, and at the same time, guilt is at its lowest, and we feel like we have been ‘good.’ We start to feel open to allowing some forbidden foods because our guilt is so low.

As we begin to eat the forbidden food, we begin to feel guilty. That guilt triggers feelings of being ‘bad,’ which leads to the ‘what the hell effect’ and we eat more ‘bad’ foods. Guilt continues to rise as deprivation declines until guilt is at its maximum, and foods are restricted and deprived again. So the seesaw continues.

The only way to get off the seesaw is to let go of deprivation. When we give ourselves permission not to be deprived, we simultaneously let go of guilt.

The key to guilt-free eating isn’t finding the lower energy, sugar-free ‘healthier’ alternative. This behavior just increases deprivation. To eat without guilt means to give yourself unconditional permission to eat. This means throwing away the idea that there are good and bad foods. If there is something that you want to eat, unconditional permission to eat means eating what we really want. It’s eating without obligatory penance. By freeing our food choices from any hidden agenda to restrict them in the future, we no longer have the urgency to overeat. We can then make peace with food where something like chocolate becomes emotionally equal to fruit.

Permitting ourselves to eat, often comes with fear. Fear of no longer restricting foods is usually expressed in the following thoughts: ‘I won’t be able to stop eating’; ‘I tried it before, but I still overate’; and, ‘If I allow myself to eat whatever I want, I won’t eat healthfully.’

Remember that when we know that previously forbidden foods will always be allowed, there is no longer the urgency to eat large quantities of them. We also tire of foods we are frequently exposed to as the food loses its novelty.

If we feel like we have “allowed” ourselves to eat forbidden foods, but we still overate, were those foods really unconditionally allowed?  Or are we just temporarily breaking the rules and still have that inner voice telling us that we shouldn’t eat that. We would have still had feelings of guilt and wanting to limit these foods in the future.

When all foods are on a level playing field, we find that it is easier to balance our intake with mostly nutritious food and occasional play foods. After only having had chocolate for dinner, we would start to crave something the complete opposite, such as some grilled chicken and a refreshing salad.

A big obstacle to making peace with food is a lack of self-trust. Restriction and continuous negative eating experiences will erode self-trust. By creating more positive experiences with food, we can start to build that trust up and improve our relationship with food. Overall, our body is built to be able to adapt to survive, so we should trust that it knows what it’s doing.

« « Mastering Self-Discipline to Improve your Health 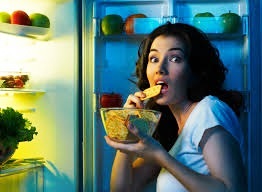 ‘ I'm very pleased with the results. Thank you again for your help and commitment.’

‘You've played a big role in Madi's development. We are very grateful for the work you do. You've been an incredible support to us.’

‘Thank you, I truly appreciate your help in getting me into a new improved lifestyle.’

‘My racing has been awesome. Never felt tired at any point. My eating plan is the bomb, I am not ever changing.’

‘I have already seen an improvement. She has been eating her dinner without us having to remind her to chew or hurry up.’

'Thank you for the inspirational session. I feel like I have a new lease on life & I am ecstatic to begin my healthy regime.’

‘My race went great - did a personal best. Been sticking to my plan with nutrition & its really helping.’

‘My wife & I were extremely pleased with the huge weight that was lifted after the consult. Thank you!’

‘The session was exactly what I needed to kick start the road to a healthier lifestyle.’

‘I felt really strong throughout. I had a great & enjoyable race. Thanks again for all your help.’

‘The visit to you has made a difference. She is eating vegetables now.’

‘You helped me feel a lot more positive. I had been feeling very concerned about my level of tiredness & low energy!’